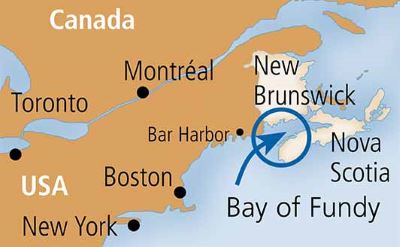 Cruises to the Bay of Fundy from Boston

The Bay of Fundy is a highlight of many cruises to Canada from Boston. Saint John, New Brunswick, is the gateway port for the Bay and is included on 7-day and 14-day round-trip cruises.

The Bay of Fundy is a natural wonder. It is 180 miles long and the depth is 400 to 700 feet. The thing that makes it exceptional is the tide. Tides in the Bay are considered the highest in the world. The water rises and falls by as much as 50 feet! The funnel shape of the bay contributes to the extreme tidal effect.

This short video explains the science behind it all.

Saint John, New Brunswick, is the port of call on the Bay of Fundy. Shop in boutiques, galleries and City Market. Taste the local seafood. Visit Fort Howe and the Carleton Martello Tower.

Popular shore excursions include the Reversing Falls Rapids, where a river flows upstream due to the fast rising tide. At St Martin's Sea Caves you can see caves carved by the tides, and photograph covered bridges and a lighthouse.